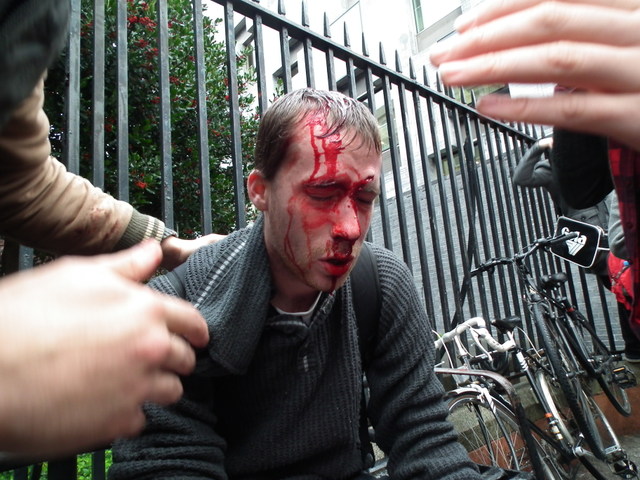 Unfortunate student gets an education on how Irish Democracy works

Union of Students in Ireland (USI) held a demonstration against threatened hikes in fees in Dublin today. The Students in Solidarity Network and the Free Education for Everyone Campaign called for a “Left Block” in order to mark ourselves out from the political leadership of USI, many of whom are members of neoliberal political parties. We lead a breakaway from the main demonstration and approx. 2000 students joined us. First we had a short protest at the Irish Parliament building before going to the department of Finance which was occupied by between 30 and 40 students.

After some time the police managed to force us out of the building, after doing so they baton charged the supportive crowd outside repeatedly, even after we began a sit-down protest.
Mounted police, riot cops and dogs were all brought out.

Several students suffered head injuries, and one female students was knocked unconscious. A few arrests. As usual the media aren’t too friendly so far, still to early to gauge public reaction.